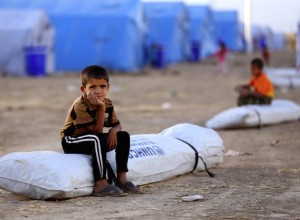 The situation in Iraq is very bleak as a result of nearly 25 years of US military operations. Despite Obama’s elaborate pretense of a military withdrawal in 2011, the US maintained thousands of soldiers & mercenaries in the country & certainly a small army of undercover operatives fomenting religious, political, & sectarian conflict.

Now the US, which encircles the country with aircraft carriers, destroyers, & bases with 35,000 military personnel, is planning airstrikes including drone assaults. Whatever the problems of the political movement in Iraq, US bombing is not the solution.

The antiwar movement was massive & strong until the Gulf War began in 1990 & for several reasons, including the extreme barbarity of the assault against Iraq, began a decline in strength & numbers. The people of Iraq have paid a terrible price for that, including hundreds of thousands of Iraqi children.

There will be antiwar rallies & picket lines around the world starting this week demanding “No new US war against Iraq.” You don’t have to be able to explain the politics of ISIS or how they’re different from Al-Qaeda to protest; you only have to oppose continued US barbarisms in Iraq. If you can’t locate a rally, make a placard & stand on any busy corner. After the first five minutes, you won’t feel weird anymore & you may be surprised at how many passers-by support you.

This small refugee boy is fleeing the city of Mosul with an estimated half a million other residents. Keep his sweet face in mind as you head out to protest.