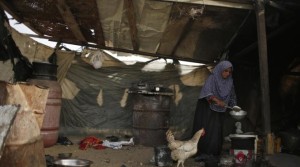 Gaza is a small territory (139 sq miles/360 sq km) so every round of Israeli airstrikes is worth it’s weight in terror. The forays are not at all indiscriminate but a calculated strategy targeting the two most developed urban areas–Gaza City & Khan Yunis. Both areas are also militarily pivotal. Israel always claims the forays are in response to rockets sent from Gaza into Israeli territory. There isn’t much documentation of these steady barrages–unless you consider IDF press releases sufficient evidence. But to chide the Palestinians for defending themselves defies not only international law but elementary good sense. If they used sling shots instead of rockets, they’d still get bombed because ethnic cleansing is the agenda, not Israeli self-defense.

Bombing this week was again over Khan Yunis, only a few miles from the Rafah crossing between Gaza & Egypt. Khan Yunis has been a conflict zone in Gaza politics, partially due to its location, since Zionist paramilitary forces took over Palestine in 1948. It then became the site of a refugee camp which today houses between 38,000 & 72,000 people (the figures are disputed between the UN & Palestinian Bureau of Statistics). In the 1956 Suez War, Israeli soldiers entered the town & refugee camp & massacred 275 people without provocation. Gaza then came under direct Egyptian military occupation until the 1967 Six-Day War with Israel when Khan Yunis was occupied by the Israeli army.

In 1968, Israel began building the Gush Katif complex of 17 settlements in the region with settlers from Nahal military brigades–that is, settlers who combined military service with setting up agricultural settlements. (Many kibbutzim were originally Nahal settlements.) The location & entire layout of Gush Katif was military–primarily to isolate northern Gaza from the southern region & Gaza City from Khan Yunis; to take Israeli control of the area to use as a buffer zone between Palestinians & military bulwark against Egypt (before it began to collude with the US & Israel as a result of the Camp David Accords in 1978).

Israel claims Gush Katif residents, who were fortified by the Israeli army, were targeted by Palestinians during the First Palestinian Intifada of 1987-1990 against Israeli repression which included extrajudicial killings, mass detentions, house demolitions, land expropriations, & deportations. Israel lodged the same complaint during the Second Intifada (or Al-Aqsa Intifada) of 2000-2005, saying Gush Katif residents sustained frequent stonings & violent attacks. According to Israel, it’s permissible for farmers armed with AK-47s & Uzis to land-grab Palestinian lands but if Palestinians resist with stones, they’re terrorists. Who can reason with such crap?

In 2005, Israel’s prime minister Ariel Sharon launched a disengagement plan which forcibly removed the 8,600 unwilling Zionist soldier-settlers & relocated them to the West Bank–another place they don’t belong. When they left, Israel moved in demolition crews to destroy all the buildings. They claim they only destroyed the homes & left all public buildings (schools, libraries, community centers, office & industrial buildings, factories, & greenhouses) intact. What are the odds of that!?

Gaza is considered an occupied territory by the UN & other international agencies like Amnesty International. Activists liken it to an outdoor prison. Apparently the way Israeli military strategists view it, it’s a case of shooting fish in a barrel. That’s how cavalier Zionists are about ethnic cleansing.

For some reason, before the recent bombing of Khan Yunis started, several media sources published photos of Palestinians at the Khan Yunis refugee camp & squatting in the rubble of the former Gush Katif settlements. These photos depicting the squalor of occupation should stand as the historical record of Zionism, not an archive of a people ethnically cleansed.

Photo is Palestinian women cooking inside her makeshift housing at the former Gush Katif settlement (on June 3rd 2014).