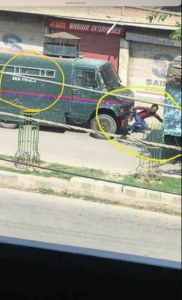 This is a photo of the armored vehicle running down & killing Adil Ahmed on May 5th. Some reports say he was protesting in Srinagar against the killing of civilians; his mother said he had stepped out from the shop where he stitched schoolbags to support his family. He was also a student. He was only in his teens. Police authorities initially called it a road accident but even if it is properly investigated & acknowledged as a criminal act, it will not be prosecuted because of India’s Armed Forces Special Powers Act (AFSPA) which grants complete impunity for occupying forces from criminal prosecution. AFSPA originates in British legislation during the colonial era. The US coercively brokers similar agreements in Iraq & Afghanistan. The colonial character of AFSPA & the US security agreements is manifest not just in impunity for criminality but in vesting the Indian army with legal jurisdiction over Kashmir so that Kashmiris have no recourse to seek justice. The same is true for Iraqis & Afghans under the US agreements.

It’s conceivable, although not likely, that it was an accident. But since there was a protest going on against the civilian killings in an area of Srinagar that is congested, the armored convoy should have been traveling at a snail’s pace instead of clipping along. What makes the crime more than criminal negligence & vehicular homicide is that the armored truck did not stop when it ran over Adil but continued on leaving him to die on the street, making it also a human rights crime. It cannot be called a war crime since only one side is armed.

This is a moving video of Adil’s family speaking about his loss: