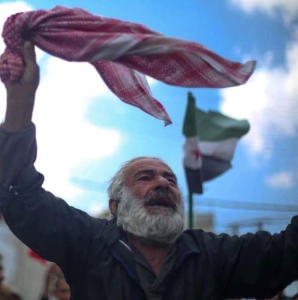 This is a very cogent article by Sina Zekavat showing the political convergence on the siege of Idlib by rightwing Islamophobe Tulsi Gabbard, fascist David Duke, & Vijay Prashad, a Bernie Sanders supporter who identifies himself as a Marxist. The convergence is more than deplorable since Prashad influences many people who lack confidence in their own ability to study & understand the complexities of the Syrian counterrevolution.

This article clearly lays out the problem. What has now to be done is sustained analysis of what political processes have led to such an international corruption of progressive & antiwar forces. It is not just a problem among western leftists as so many polemicists maintain. An understanding of this phenomenon is critical if we are to regenerate the antiwar movement on a principled basis. We need to understand how to work, even if it’s possible to work, with those who betrayed the Syrian Arab Spring uprising but who oppose US wars in other countries. Factionalism & sectarianism are not helpful here while at the same time we cannot compromise on opposing militarism, Islamophobia, & anti-Semitism which inform most support for the Assad regime & certainly the corruption of the antiwar movement.