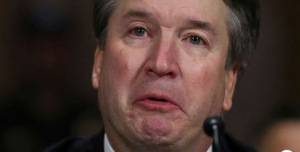 Sniffles Kavanaugh: as a servant of the US ruling class, this lowlife creep has a rap sheet of human rights crimes a mile long. Now when he gets called out as a rapist, he breaks down & cries like a baby. The likelihood is that the FBI investigation will be mostly sham & this guy will be voted on to the Supreme Court, just like Clarence Thomas before him. Trump has managed to do what generations of social critics have been unable to do: discredit every institution of the US government, including the presidency, Congress, FBI, CIA, & Supreme Court. That’s a good thing. Now we can get down to the business of owning our responsibility for making this country suitable for all human beings to live in, not just white rich men.