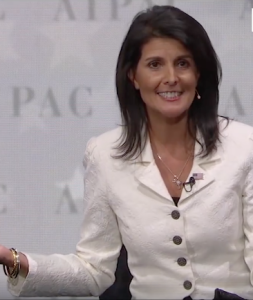 UN Ambassador Nikki Haley has the regrettable habit of talking through clenched teeth, not unlike a Pit Bull, but with ferocity derived from the orange gorilla in the White House who talks through his ass. In other words, outside that position she’s just another two-bit opportunist social climber, very like Hillary Clinton. Speaking to an AIPAC event where she knew they’d eat her grandstanding up, Haley called herself a new sheriff in town & talked about wearing high heels not as a fashion statement but to better ‘boot’ Palestinian representatives out at the UN because “the days of Israel bashing” & condemning its apartheid policies are over.

We got news for the new US sheriff at the UN who thinks of herself as a goon squad in high heels & lipstick. Palestinian solidarity is under serious legal attack, especially the boycott movement & especially on campuses. Zionist ideologues have made Palestinian solidarity & BDS central issues of civil liberties in this & many other countries. The struggle in defense of free speech & free association–that is, the fight to defend the Bill of Rights (the only salvageable part of the US Constitution)–has now broadened to incorporate millions of others who will be marching for the first time with Palestinians & their supporters. We cannot be intimidated by her & Trump throwing down the gauntlet against the Palestinians–just as Clinton pledged in her campaign. We will stand with them, build support for them, & fight like hell with them regardless of Haley’s jackboot diplomacy at the UN or Trump’s provocations. And the movement will grow & be strengthened. That’s just the way it is because there’s a new posse in town who won’t stand for the bullying. So kiss off with the threats, not kick off, sister Haley. We’re on your case.

(Picture is screen shot from Haley at AIPAC feeling within her element pandering to Israel.)