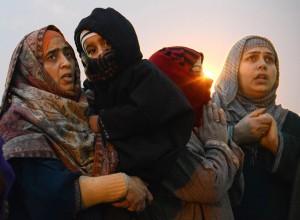 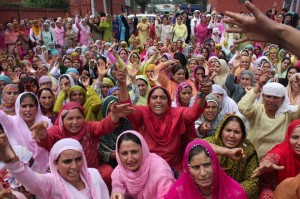 This is a holiday season & not just for Christians–so it makes sense photojournalism would showcase religious practices & Santa Claus stunts from around the world. But it does make you wonder when media ignores news in a region most of the time & then crops up with holiday shots–like this one from Srinagar, Kashmir.

The top photo is Kashmiri Muslim women piously reacting at a religious ritual surrounding the birthday celebration of Muhammed. No offense to piety but when it comes to Kashmiri women, their religious practices are the least newsworthy events they’re engaged in–& they’re engaged in plenty.

Just a few weeks ago, massive protests erupted in the Bandipora district of Kashmir over the torture of four people, including a mother & her son, by Indian army personnel. That’s a really important story which received no media coverage outside Kashmir.

Kashmiri protesters have been stonewalled every inch of the way for decades–& that makes the story all the more important to report rather than ignore. Indian authorities hold pseudo-investigations concluding the women accusers (from teenage girls to elderly women) are perpetrating a “massive hoax” orchestrated by militants & international allies (presumably the human rights groups) to make the Indian occupation of Kashmir a human rights issue. And of course there is still the issue for women of the disappearance, torture, murder of their family members.

An Indian law called the Armed Forces Special Powers Act allows Indian military & paramilitary forces what Kashmiri women call “unbridled impunity” in committing all manner of human rights violations. Because Indian troops cannot be prosecuted for their crimes, not a single one has been prosecuted for rape, murder, or destruction of property. It’s a very similar legal arrangement to what the US imposes in Iraq & Afghanistan allowing soldiers to commit war crimes & walk away scot-free from prosecution.

International solidarity with the people of Kashmir should be incorporated into antiwar activities. The news blackout does not signify its lack of importance but highlights the necessity of demanding India end the occupation of Kashmir.