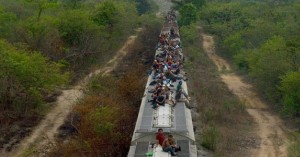 Local news is issuing conflicting reports about the new surge of unaccompanied children from Central America crossing the US-Mexico border just a few miles from here. Some reports have said 5,000 children & other reports 10,000 children since October 1st.

They’ve traveled over a thousand miles (including fording rivers), crossing Mexico atop the infamous northbound el tren de la muerte (“the Death Train” also called “la bestia”). These are a network of freight trains which do not stop for immigrants to board or get off–causing hundreds of mutilations, amputations, & deaths for those fleeing countries with no disability social services.

Immigrants on the trains are subject to paramilitary & criminal gang violence, extreme cold & exposure, kidnapping, robbery, extortion, rape, assault, & mass disappearance. Some will end up in mass graves. Every year a caravan of grieving mothers from Central America comes looking for their children lost on this route.

A few years ago, the Mexican senate legalized the right of immigrants to travel through Mexico to the US but has done nothing to facilitate that right. Federal troops routinely stop & board passenger buses going north to check for & remove immigrants because the Mexican government functions as the southern flank of US immigration policy.

Along the train route however, Mexican families & human rights activists offer temporary hospitalities like shelter, food, medical care, baths, clothing. In some places where the trains slow, they rush to passing trains to hand off bags of food.

Once the children cross the border river (which has fallacious signs on the Mexican side warning of alligators in the river), there are no appropriate facilities to house & care for so many children since the Obama regime is investing in militarizing the border. Some children are warehoused in prison-like detention, others in abandoned military bases, & a few hundred on a ranch further north in Texas. But once again, local charities have set up a shelter to provide them hospitality & help. A Catholic church center is staffed by volunteers.

Around the world, including the US, immigration has become a child welfare issue. When it comes to children, there are no borders. There is either humanity or barbarism with no middle ground for mealy-mouth equivocations.

(Photo of La Bestia from CNN)