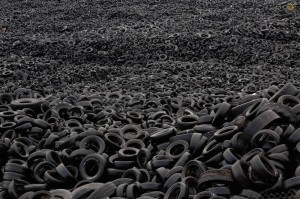 Neoliberal waste management: solid waste disposal, once a public service, has now been privatized across the globe–driven by austerity programs, especially IMF-World Bank policies & bullying. Those who argue for privatization claim it’s cost effective for cities & that private companies exhibit more innovation in waste disposal methods. How much innovation does it take to turn planet Earth into one stinking, toxic landfill? The only innovation made is the introduction of racism & neoliberal colonialism into waste management so that the biggest mountains of waste are on Native American reservations in the US (one such dump on a reservation in southern California is a mountain of stinking human feces from San Diego) & adjacent to the biggest slums in Africa, Central America, & South Asia so that the poor can earn pennies a day recycling & suffering terrible health consequences, especially respiratory & skin infections.

This tire graveyard is in Sesena Nuevo near Madrid, Spain but it could just as well be near Des Moines, Iowa. They’re all over the place–raising the question why isn’t the tire industry responsible for their disposal & recycling? And also, why hasn’t the tire industry been mandated to produce a tire with a life span longer than five years?

The class that administers neoliberalism, the barbaric phase of capitalism, can’t help itself. It feeds on plunder & profiteering & is caught in it’s own deadly system. We need to form an emancipation army to help extricate the poor murderous fools from their seats of power & send them packing. There’ll be no need for revenge because there’ll be plenty of work for them to do dismantling the mess they made of this world. That way slum residents can find suitable employment & get health care for their maladies. In the US, the marauders can begin with that pile of poop outside San Diego where they will be provided with respirators.