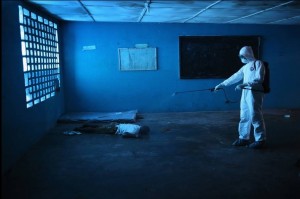 This photo which should be entitled “Neoliberal health care”, was chosen by the Wall Street Journal as among the best for 2014. It is a Liberian health care worker in Monrovia disinfecting the body of a man who died in a schoolroom serving as an Ebola isolation ward (in August). Can you imagine a more bereft way of dying? Can you conceive of how it felt for a deathly ill man to be dumped alone in such conditions?

Meanwhile, the notoriously corrupt government of Liberian president Ellen Johnson Sirleaf (2011 Nobel Peace Prize winner educated in the US Ivy League) accepts billions of dollars in US military aid & dishes out billions of dollars in concession agreements to multinational corporations to plunder Liberia’s considerable natural resources. Liberia is fully committed to the neoliberal way of doing business which includes agribusiness plantations for palm oil & the largest rubber plantation in the world owned by Firestone Tire. It has the highest ratio of foreign investment in the world so foreign plunder of iron ore & timber resources for export is legally sanctioned.

Liberia also shares a shameful distinction with Israel: it operates as a major trader of Sierra Leone’s “blood diamonds.” Blood diamonds are also called conflict or war diamonds (& that includes all diamonds sold today) because of the violence & civil conflict involved in their extraction & trade. In 2001, the UN banned Liberian diamond exports because of the human rights violations involved in the trade. But when Liberia signed the Kimberley Process Certification Scheme agreement in 2007, the ban was lifted. Of course the Kimberley Process is a scam by the diamond industry (which includes all the big jewelers) to clean up the image of the diamond trade based in neoliberal plunder & war. Think not only Sierra Leone but the DR Congo where the war over diamonds & other minerals has caused the deaths of over 6 million people since 1998.

As for why there is an abandoned school to use as a clinic in a country with a high illiteracy rate–part of neoliberalism involves privatizing & reducing public funds to sustain public education by providing supplies & paying teachers. In many areas children must pay for school in a country where thousands have been dispossessed, displaced, & their livelihoods destroyed by agribusiness plantations.

Our fullest solidarity with the working people of Liberia. Solidarity, if it is to mean anything, begins with boycotting diamonds & doesn’t end till neoliberal barbarism is removed from the face of the earth.