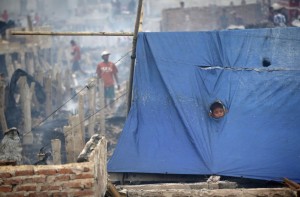 The little guy is peeking out of a tent shelter set up after a fire destroyed about 300 dwellings in the Kapuk Raya area of north Jakarta (Sept 9th). Over 1,000 people were left homeless. There is very little information about the fire, including what fire officials think caused it. All we’re told is that the dwellings were in a densely populated area alongside factories. Fire forensics are not likely to be forthcoming because there’s a pattern here operative in many cities across the world of arson for purposes of gentrification.

The Kapuk Raya area is in the very heart of a district targeted for a massive infrastructure development program. The government is so committed to the program that is currently preparing 17 government regulations, 11 presidential decrees, 2 presidential instructions, 63 minister regulations & five other regulations just to implement deregulation & the privatization of public lands to make it easy for private investors & developers.

The Kapuk Raya area is walking distance to the Java Sea, an area being developed as a tourist mecca. There are amusement parks, mega-malls, restaurants, golf courses, discotheques & karaoke bars. Holiday Inn just opened the fifth of 17 planned grand hotels in the same neighborhood. All of this “infrastructure development” to attract millions of well-heeled tourists requires the eviction of thousands of residents–most of whom are seasonal workers & rural people who came to Jakarta after being forcibly expropriated by palm oil agribusiness plantations & displaced by scorched earth deforestation.

The Indonesian government has long & notoriously used forcible evictions of slum dwellers. There is no suggestion in the media that this fire was arson for purposes of gentrification. An investigative reporter should be at the site talking to burned-out residents since there is generally no point in talking to fire officials. Around the world it is common for arson to be employed to burn down slums–along with bulldozers & riot police. In most of these slum fires, residents claim firemen showed up late, had no water hoses to fight the conflagrations, stood around when they did show up & let residents battle the fire on their own.

Arson is considered the least line of resistance in slum evictions. It is also a human rights crime endangering the lives of children, elderly, & infirm.