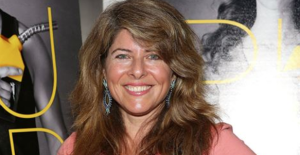 Nearly 30 years ago, Naomi Wolf wrote a brilliant book called “The Beauty Myth” but neither her self-indulgent writings promoting “Playboy feminism” nor her political associations with the Democratic Party since then have risen above the level of tedium & compromise. To be fair, she did come to some understanding of Israeli apartheid when Israel was carpet bombing Gaza for seven weeks in 2014.

But as we see over & over again, celebrity goes to many people’s heads & they begin to act & get looked to as though they are authorities on everything from 5-star hotel accommodations to revolution & counter-revolution in Syria. Wolf doesn’t appear to have done more than five-minutes investigation about what’s going on in Syria but is wading in on the issue again after the NY Times called her out in 2014 for suggesting videos of ISIS hostages were all actors. She was at her level advising Al Gore how to act less like he had a pole stuck up his ass & should not be posting about Syria until she has spent enough time investigating so that she no longer has to post Wikipedia entries as proof.

She just posted an article from Ecowatch written by Robert Kennedy, Jr. & widely-circulated by Assadists claiming the war in Syria is “another pipeline war.” Assadists, whose investigative integrity is as shallow as Wolf’s, circulate this ignorant rubbish because it makes war in Syria all about oil & ignores the popular revolution against Assad’s dictatorship. What makes Kennedy an authority on Syria any more than he is on the murder of Martha Moxley or the Warren Commission?

Wolf really shames herself as a credible & honest investigator when she posts an entry from Wikipedia to discredit the Syrian Observatory for Human Rights (SOHR) who she describes (borrowing from Assadists) as “one single guy in Coventry UK who owns a clothing shop” & who “has been criticized for never sharing his raw data or methods.” Some anti-Assadists have questioned the reliability of SOHR figures on fatalities & injuries in Syria but of course the sources are within Syria & the group, whether it’s one guy in Coventry or an entire apparatus is not going to divulge that information without risking the lives of the informants. Is Wikipedia the best Wolf can do for impugning the data of SOHR?

If Wolf’s research ever rose above the level of Wikipedia, she would know that it’s an entirely unreliable source of information on any number of questions, especially Israel & Palestinians (for its dishonesty, the founder of Wikipedia has been feted & awarded big bucks by Israel), Kashmir, & the Rohingya struggle. Just for starters.

Shame on Naomi Wolf & shame on those who share her unsubstantiated rubbish. She should learn to spend time researching before she spouts her mouth off & risks becoming the Democratic Party version of Kellyanne Conway.