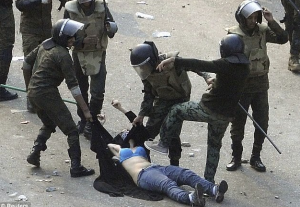 Angela Merkel’s proposed burqa ban in Germany is first & foremost an attack on refugee rights to asylum. In the US, criticisms of the burqa & hijab & of Islam in general as “jihadist” are used to justify war–most prominently now in Syria.

This post was written in January 2013, eight months before Morsi was ousted & the military junta again ruled directly without the pretense of democracy. Hopefully it won’t generate a debate about Morsi–& whether he was ousted by a coup or a revolution–but will address the issues of violence against women in the Egyptian uprising. Egyptian women’s rights activists & male democracy activists addressed the violence against women in Tahrir Square but western media continued to portray it as the character of Islam & used it to discredit the democracy movement.
*******************
Public protest in Egypt has crescendoed over the past several months in response to the allocation of dictatorial powers by the Morsi regime, the exclusion of human & democratic rights in the new constitution, the continuing dominance of the Egyptian military, & continuing police brutality against protestors. Hundreds of thousands of people are defying martial law & reasserting the demands of the January 25, 2011 uprising that bounced the dictator Mubarak. As of Sunday, over 40 people had been killed & 500 injured in police assaults on the protestors. This is a political resurgence of the greatest consequence to those struggling against tyranny around the world.

One of the most reported stories coming from the massive resurgence is about the violent sexual assaults on women in Tahrir Square, Cairo. In a typical attack, a mob of men surround an isolated woman, collectively grope, manhandle, & strip the woman, endanger her, & in some instances rape her–regardless of whether her attire is secular or Islamic. Over the past months, activist men & women have formed groups & squads to intervene, rescue the victims & provide services to them in safe houses. One of the most prominent groups is Operation Anti-Sexual Harassment (OpAntiSH), set up last November.

This is all very disturbing news which could lend credence to the Morsi regime claim that the protestors are thugs trying to bring down the new democracy. It could even make credible the Islamophobic claim that rampant sexual harassment is endemic to Arab & Egyptian culture. Some media report these assaults as spontaneous outbursts of mob violence akin to the everyday street harassment women face in Egypt. There is no question that sexual aggression & violence is a problem in Egypt. As we know from assault & rape rates from the US to India to Egypt, sexual violence & harassment is a massive social problem in every country.

OpAntiSH & other activist groups are cogent & unambiguous in their statements that the attacks on women do not appear to be hordes of spontaneously combusting misogynists but rather paid & armed assailants targeting women to deter them from participating in the protests–in other words, most likely police agents. From the beginning of the Egyptian uprising, women have played a central role & terrorizing them by making Tahrir Square dangerous not only weakens the power of the movement but discredits it before the world.

OpAntiSH activists are not simply engaging in conspiracy thinking. In monitoring the attacks they have observed a pattern–in terms of location, encirclement of isolated women, method of assault, & the use of weapons–that bear a remarkable resemblance to attacks by police agents under both the Mubarak & Morsi regimes. That would explain the complete inaction by the state despite appeals from the UN & groups like Human Rights Watch. It is certainly not irrelevant that along with this inaction, the new Egyptian constitution explicitly excludes rights for women.

But we don’t have to rely just on the judgement of OpAntiSH or other political & women’s rights activists in Egypt. For several days in the fall of 2011, the entire world witnessed aghast as the Egyptian military & police physically & sexually assaulted women protestors–stripping, beating, manhandling, & dragging them through the streets by their hair. There are numerous photos but the one here (from Nov 2011) is among the most outrageous & memorable.

Most of the media accounts cite the authority of OpAntiSH on the assaults but many neglect to include their judgement that the attacks on women are most likely organized by undercover agents.You can bet your bottom dollar this omission is in the service of Islamophobia in order to discredit & undermine support for the Egyptian uprising.

To such rubbish our response is fullest solidarity with our Egyptian sisters & with the Egyptian uprising against tyranny. End all US aid to the Morsi regime!