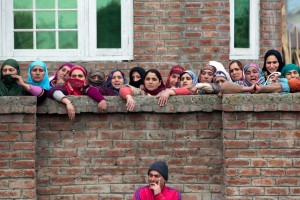 Another young man has been murdered in Kashmir, most likely by the Indian occupying army. Media accounts of what happened to Owais Bashir Malik, a university engineering student, are sketchy & contradict each other (even in the same article) but as best can be determined, young Malik went missing Tuesday & was found Thursday near his home with his throat slit. Protesters immediately gathered accusing the Indian army of torturing & killing him.

They didn’t just pull the accusation out of the air since the Indian army is responsible for the murder of over 70,000 people & the disappearance of 8,000 others since 1989. In the case of Malik, a relative claims they went to a nearby army camp where officials admitted he was in custody & would be released the following day. The next morning his mutilated body was found.

An army spokesman denied accusations that Malik was in military custody & the police said they are investigating the case as a routine murder case. The government nevertheless ordered an inquiry into what all agree is a suspicious death but that will likely end like usual–by clearing the Indian military of all culpability. It’s the same mockery of justice as the Israeli army investigating itself for the murder of Palestinian activists.

Police again attacked Malik’s funeral cortege with teargas & warning shots to disperse the mourners. It’s so barbaric to interrupt burial rites with violence but we have seen this at hundreds of funerals in other countries where tyranny prevails. The deaths are often extrajudicial executions & the funerals become political expressions of defiance & solidarity.

Summarily executing people is a form of social control intended to terrorize & demoralize people & deter them from resisting the occupation. That makes international solidarity & pressure on the Indian government to end the occupation all the more imperative.

The photo is mourners watching the funeral procession of Malik in Srinagar yesterday.