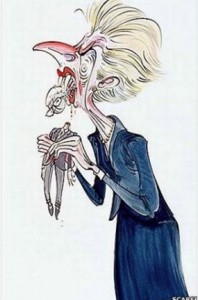 This is a political caricature of Margaret Thatcher by English cartoonist Gerald Scarfe. He’s skewered Netanyahu & other political figures with the same ruthlessness. This is when satire reaches its heights as a political weapon & by comparison exposes the putrid character of Charlie Hebdo caricature which targets the powerless & oppressed.

The Iron Lady, Margaret Thatcher has been rotting in hell for nearly two years now–“rusting in peace” as our Belfast brothers & sisters say. Not long enough. In a world of arrogance & criminality, she distinguished herself. It’s customary to squeak out a few dry tears for even the most despicable corpse. But why be paltry when real grief abounds?

This is Mrs. Thatcher, says Mr. Scarfe, “showing her soft & caring side.” Don’t you just love satire when it’s directed at the criminals in society? When it’s got the power relationships straight?