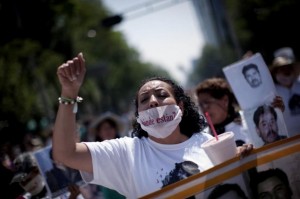 For the fourth year in a row now on Mother’s Day, the mothers & families of the disappeared in Mexico gather to protest in Mexico City. All of the media reports say the march is for the ‘25,000 people disappeared in Mexico over the past five years’. It’s not clear why they’re repeating those figures (25,000 over 5 years) since they don’t correspond to any of those published by reputable sources for the past many years. None of the sources (including Le Monde, Human Rights Watch, the LA Times) just grabbed an estimate out of the air; most of them claim they came from the Mexican government, including the Mexican military involved in a huge percentage of the disappearances. There are data banks & watchdog groups who collect this information.

The official estimates coming from the Mexican government are staggering. From the 2006-2012 regime of Felipe Calderón, there were over 26,000 disappeared cases where the police or military are directly implicated. It’s not certain (but it is unlikely) that the estimated 8,000 to 10,000 Central American immigrants disappeared every year crossing through Mexico are included in that figure. Estimates of outright murder under his regime range from 120,000 to 130,000.

Calderón is now serving an inaugural fellowship at the Harvard Kennedy School of Government. When he left the presidency, he left a country reeling from military violence, kidnappings, extortions, beheadings, & human rights violations. Let it never be said under neoliberalism that mass murder ever held a person back. He/she will be feted in the Ivy League.

Calderón did not initiate mass murder & disappearances as a form of social control; it’s a long-time practice in Mexico & over 30 other countries. It isn’t just a means of getting rid of political dissidents but of terrorizing the public. The figures for the disappeared under the 2000 to 2006 regime of Vicente Fox are not readily available but the outright murder estimate is over 60,000 people.

Under the Peña Nieto regime since 2012, there is a new government statistical system which is being challenged by many human rights groups & watchdog agencies for underreporting. According to Proceso, the Mexican political journal, the rate of disappearances under Peña Nieto has more than doubled that under Calderón. Proceso claimed on average six people per day disappeared under Calderón & 13 people went missing in Mexico every day after Peña Nieto took office. Mexico’s missing persons registry (RNPED) reported that from his investiture as president in December 2012 until October 2014, 9,384 people had been disappeared.

Once again, the estimates are not just pulled out of the air. The detentions by security forces occur in victims’ homes in front of family members, at security checkpoints, at workplaces, or public venues like cafes & bars. When family members inquire at police stations, they are told the detentions never took place, the arrested had connections to organized crime, or ran off in a romantic liaison–& the government does nothing to find the missing. As in the case of the 43 Ayotzinapa students disappeared last September, there is direct involvement of the military.

Our fullest solidarity with the mothers & families demanding justice & the return of their beloved.