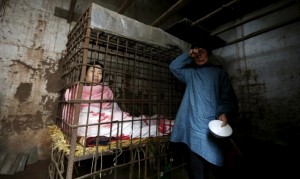 Periodically media reports another incident of a mentally ill person in China being caged by his/her mother. There’s a suggestion of mother-blaming to the reports & invidious comparisons to the US or European approaches to mental health care. Invariably the article will include the 2009 Lancet journal estimate of 173 million Chinese with a diagnosable psychiatric disorder, of whom 158 million have never received treatment. Staggering even in a population of over 1.3 billion people. Though not as staggering as the incidence of mental illness in the US (62 million out of a population of 325 million).

Many people in the US over 50 years old recall the “insane asylums” where the mentally ill were warehoused in the most abysmal & abusive conditions with similar institutions for those with disability. Part of the gestalt of the 1960s & 1970s was getting rid of such inhumane abominations & replacing them with community-based treatment centers & often psychotropic drugs (the jury is still out on these). The transition has not always gone smoothly for those with mental illness, many of whom end up homeless–in particular, war veterans. So the US has little cause to gloat in comparison to China.

Still it must be acknowledged that the state of mental health treatment in China is not just a nightmare but outright barbarism. One Chinese publication reported that in Hebei Province alone (which surrounds Beijing), thousands of severely mentally ill people are kept in cages by their families as their only form of treatment. The state does not allocate resources or provide affordable facilities for the treatment of mental illness particularly in the rural regions. If the afflicted individual has engaged in a violent act, families feel they have no alternative to caging them & often chaining them for years.

China does have mental asylums but unfortunately it has been cited for using them to incarcerate thousands of political prisoners. Police-run psychiatric custody for democracy activists isn’t what you call addressing mental health problems which are massive in China.

It really has to be asked what is causing such widespread mental chaos & misery in China, the US, & elsewhere? China also has a particularly high suicide rate. The eugenicists will claim over-population. That’s their answer for everything capitalism throws out of whack. The reasons must include social, environmental, dietary, political–a sense our lives are not manageable & under our own control. One reason given in China is the immense population of migrant workers moving to cities for work, forced to abandon families & small children for most of the year. Thousands of working people in sweatshops must surely take a psychological toll. In short, capitalism is at odds with human dignity & social life.

This caged man is Zhao Xiaoyang at his home in Zhejiang province (near Shanghai). He was diagnosed with mental disorder in 2001 after beating a man to death. His mother shown here cares for him. One can only imagine the stress, loneliness, & depression she must endure.

Neoliberalism, the barbaric phase of capitalism, is incompatible with human happiness & dignity. And “that’s all she wrote.”