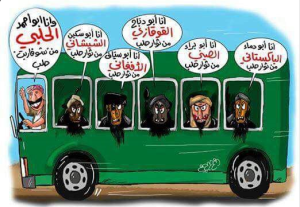 Apologies for this vile cartoon which is posted only to expose Assad’s favorite apologist, Mother Agnes of the Mutilated Truth:

Mother Agnes Mariam de la Croix is a Christian nun & mother superior of a monastery in Syria appropriately named St James the Mutilated because as an Assad supporter no one can mutilate reality in more pious language than Mother Agnes.

She’s one of those “political savants” who feel their way by animosities to political commitments & very early outspokenly denounced the popular uprising against Assad’s dictatorship. As a mother superior enforcing the vow of obedience which tolerates no ifs, ands, or buts from subordinates, autocracy must be the strong affinity that drew her to dictatorship. It remained steadfast even after Assad accidentally bombed her convent.

In 2012, she told an Australian interviewer that the Syrian uprising
had “steadily became a violent Islamist expression against a liberal secular society.” As if conservative autocratic nuns value a secular society! That’s a new one in propaganda.

The cynical, lying-assed nun is an unofficial spokesperson for the Assad regime, is frequently interviewed on Russia Today, & in 2013 was toured by Assadist groups throughout the US, Europe, & Canada mostly to church groups since they play an important role in the antiwar movement. She is a favorite of Assad supporters, feeding their hatred of Muslims with such divinely inspired malignancy. Fares Shehabi, the Assad official in Aleppo & point man for foreign propagandists like Beeley & Bartlett, posts her rancidities & she is often quoted since she’s a cornucopia of lies.

She plays that nun thing to the hilt but it’s hard to fool those of us who know the inside workings of convents. She said when she lived in Lebanon she used to hate Syrians for bombing Lebanon but then had a conversion on the road to Damascus & “learned never to hate anyone.” On her Twitter wall she says: “Jesus-Christ fills me with His Life. The Holy Spirit of God guides us in a wonderful way.” In a pig’s eye, Mother Agnes! Cut the crap! Don’t blame any holy spirits for the Islamophobic voices in your head,

How does she explain this absolutely racist cartoon she posted on Twitter with the comment “Another scope on the pluralistic Syrian revolution”?