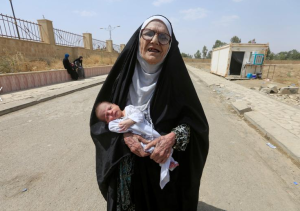 This elderly woman with an an infant is fleeing Mosul which has been under aerial & ground bombardment by Iraqi, Kurdish, & US-coalition forces since last October. Photojournalism is an extremely dangerous occupation. It doesn’t exist for most US wars, not because it’s so dangerous but unless a journalist is embedded up the ass of the US military to control the information available about the character of the war. That’s exactly the function of Assad propagandists Eva Bartlett, Vanessa Beeley, & Robert Fisk who embed with the Syrian army.

We can never allow ourselves to be detached from the realities of US wars. The stark realities are that at least 10,000 civilians have been killed in Mosul, including burned to death by white phosphorous, to take out less than a few thousand ISIS fighters. Nearly a million civilians have been forced to flee to refugee camps without sufficient food, sanitation, tents, medical care. Many are elderly, pregnant, infirm, with special needs; all are war-traumatized.

Those whose solution to end the war in Syria is to call on the US Pentagon to impose a No Fly Zone display a profound detachment from the realities of war, from the history of a No Fly Zone, & exhibit a staggering confusion about the nature of US militarism. The only workable & principled demands to end the slaughter in Iraq & Syria–wars now irrevocably yoked together–is the immediate cessation of bombing civilians & the immediate, unconditional withdrawal of all US-coalition & other foreign military forces from Iraq & Syria. If ISIS is going to be defeated, the US & other countries will have to stop arming them.