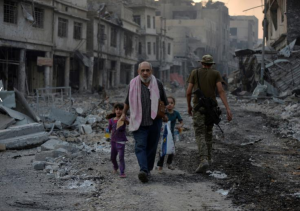 The way media reports it, Iraqi civilians like this man & small children, are fleeing ISIS fighters in Mosul. They don’t report US-coalition bombing, including with white phosphorous, or the mortars & rockets from Iraqi & Kurdish ground forces.

The only principled antiwar demand is the immediate cessation of bombing & the immediate, unconditional withdrawal of all US-coalition & foreign military forces from Iraq & Syria. If they want to stop ISIS, cut off their arms supply routes & stop delivering weapons to them

(Photo by a stringer/Reuters)