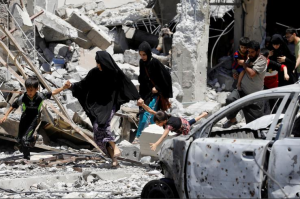 Mosul apocalypse, Emancipation US-style: the operation is called “We Are Coming, Nineveh” since the ancient city of Nineveh was on the outskirts of modern-day Mosul.

When the operation began last October, US intelligence estimated the number of ISIS fighters in the whole of Mosul at 3,000 to 5,000 fighters. A higher estimate from an Iraqi source was 7,000 to 8,000 fighters. In March, Iraqi forces reported at least 1,000 were killed, presumably in the battle for east Mosul, many had fled, & hundreds had surrendered. Iraqi forces have not released the number of ISIS fighters who surrendered because it’s likely most were shot on the spot or handed over to CIA operatives for delivery to a torture center.

Media coverage of Mosul is down to a trickle but Iraqi military officials now report ISIS is “trapped” & that there are 8,000 ISIS fighters left in west Mosul. So after nearly nine months of ground & aerial bombardment & the forced evacuation of hundreds of thousands of civilians, is the “We Are Coming, Nineveh” operation more like Aleppo than a liberation?

These are civilians running for their lives from fighting between Iraqi forces & ISIS fighters on the ground & US airstrikes in west Mosul.
The way to liberate Mosul from ISIS urban guerrillas is not indiscriminate bombardment of civilians but cutting off the weapons supply lines which are apparently not diminished by being “trapped” by Iraqi, Kurdish, & US-coalition forces.

The only principled demand for antiwar forces is to demand the immediate, unconditional withdrawal of all foreign military forces from Iraq & Syria.