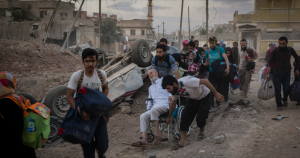 Images from west Mosul look very much like images of east Aleppo which Assadists claim was liberated by Syrian & Russian bombers: mountains of cement rubble.

These are civilians fleeing aerial & ground bombardment in west Mosul just days ago. Principled antiwar activists denounce the carpet bombing of civilians even under the guise of fighting ISIS. The US Pentagon has to be held to account for delivering over $1 billion of weapons to ISIS, according to an audit by the US Department of Defense.

The only principled demand is for the immediate, unconditional withdrawal of all US & foreign military forces from Iraq & Syria & to end the weapons supply lines to ISIS.

(Photo by Ivor Prickett for The New York Times)