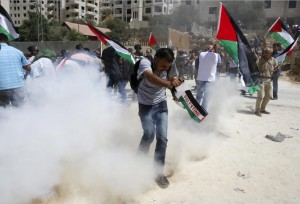 Here’s another case of media covering for Israeli crimes with half-assed explanations to bewilder the inattentive reader. The Yahoo caption to this photo read: “A Palestinian runs for cover from a sound grenade fired by Israeli border police during a protest against what organizers say is land confiscation by Israel to make way for the controversial barrier in the West Bank city of Beit Jala, near Bethlehem August 30, 2015.” It doesn’t really lie but there’s barely a shred of truth.

First of all, the picture is damning as hell of excessive military force against unarmed Palestinians & against the Israeli occupation of Palestinian lands. Secondly, those aren’t “border police”; they’re part of an occupying army. Thirdly, that “controversial barrier” is an apartheid wall that cuts through Palestinian farm land, mows down villages, & lops off families & communities from each other.

Lastly, they can just cut the crap on that “what organizers say is land confiscation.” The Exodus narrative is shot to hell by the repeated carpets bombings over Gaza & by denunciations even by the likes of Obama & the UN for aggressive settlement projects like Susiya where entire villages are evicted & demolished so Zionist settlers from all over Kingdom Come can move in & take over Palestinian land. Everybody knows that. The only difference is that right-wingers think Zionists have a Biblical claim to Palestine–because they sure as hell don’t have a historic claim.

No offense to the Bible, but when it’s the only historic document you can come up with for title, your claim is a shabby one. It’s as if Irish-Americans found a pottery shard in the Rhineland with the words to “Danny Boy” & started laying land claims to move back from whence they migrated 3,000 years ago. It’s arrant nonsense. The Bible is a religious book, not a historic account.

Build the economic, cultural, & academic boycott of Israel. Demand no military aid to Israel. Demand US end its aid to the settlements in the West Bank.