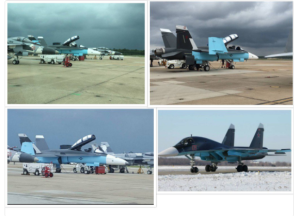 When it comes to investigative journalism on Syria no one is as probative as the blogger Moon of Alabama (MoA) who sits on the back porch in the Alabama outback culling news from other libertarian bloggers of the crazy-pants kind & howling at the moon.

The irrational bellows resonated all the way to Canada with the editors of Global Research so they made MoA a regular contributor throughout 2016–which is odd because MoA has never traveled from the pig farm to Syria so how would s/he know anything?

The MoA repertoire of exposés includes all the false flag operations run in Syria by the Salafists, US, Al-Qaeda, ISIS; the Pentagon coup d’état against Obama; excoriations of the “wannabe sultan Erdogan;” & proof the Zika virus is another false flag operation. But surely MoA’s most noteworthy exposé is that the US paints its fighter jets in Syria to match the color schemes of Russian bombers so that pro-US eye-witnesses can take mobile photos & claim Russia is committing war crimes.

Now our intrepid blogger has topped even that revelation with an article titled “U.S./UK Paid “White Helmets” Help Al Qaeda Blocking Water To 5 Million Thirsty Syrians” where MoA shows s/he is no backwoods bumpkin but can in fact read the White Helmet insignia in Arabic. It might have been better if MoA hadn’t quoted MoA to prove Al-Qaeda poisoned the water supply to Damascus. But his/her career as a propagandist is in the early stages & soon s/he’ll catch on just like Bartlett & Beeley, the Beavis & Butthead in Assad’s stable of propagandists.

These are the damning photos from MoA’s exposé about the baby blue bombers. At first it seemed Global Research had the good sense not to publish this MoA story but in fact they did by another of their halfwitted bloggers. We would refer them to Snopes which pointed out the entirely different shapes of US & Russian bombers but after Snopes took out most of Eva Bartlett’s lies in one fell swoop that site is now considered fake news.

PS to Assadists: If you don’t want to be ridiculed, don’t leave a trail of social media droppings.