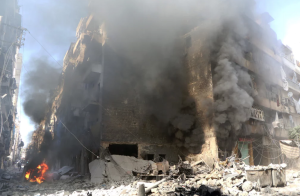 It’s often said that those who won’t engage in pissing contests with Assad supporters are dodging the arguments advanced because we’re unable to answer them. There’s nothing compelling or cogent that’s worth dodging. It’s propaganda & adheres to that model of persuasion: name calling (“head-chopping jihadists”); fear mongering (tapping into Muslim-hating & paranoia about MSM); & bandwagon politics (all the really trendy anti-imperialists support bombing civilians to defend Syrian national sovereignty.)

The top stories harped on by Assad propagandists & their fellow travelers include: vilifying the White Helmet rescue workers to take attention away from Syrian & Russian bombing; discrediting baby Omran as staged to deny children are suffering under that bombing; portraying all opposition to Assad as US-NATO & jihadist head-choppers to deny the existence of a popular, on-going revolution. How does one politically answer that crap? How do you chase a chimera? To address such scurrilous claims, one has to probe the psychological depths of Islamophobic angst along with the venal motivations of propagandists when not everyone has the stomach for dredging such malignancies.

As Syria & Russia resume carpet bombing in Syria, Assad propagandists & their fellow travelers are out in force justifying the bombing attacks on civilians in Wadi Barada by claiming Al-Qaeda forces from the area poisoned the water supply to Damascus & need to be taken out. Every such accusation has to be vetted which Assad supporters won’t do because fear-mongering, boogie-man politics is part of Assadist appeal. But serious-minded people not driven by infantile angst will investigate because it’s more necessary to investigate the reality of military operations than to plumb the psychological cesspool of hating on Muslims.

Bellingcat is a useful resource of citizen journalists who investigate stories using satellite imagery & other such tools available on the internet. Today, they posted their investigation titled “Wadi Barada: What Happened to Damascus’s Water?” One can question & refute that carefully sourced investigation but it cannot be rebutted with vituperations against “jihadists” without some documentation. Enough of that baloney.

This photo is from east Aleppo after Syrian & Russian airstrikes in September 2016 because many of the bombing videos from Wadi Barada are not verified. Is this image the principled antiwar activist’s vision of a freedom struggle?