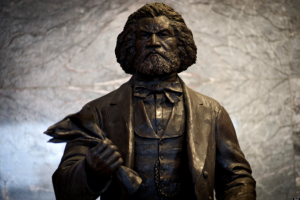 Frederick Douglass (1818-1895) is one of the most outstanding figures in American history. He escaped from slavery in 1838 & became a leader, writer, & orator of the abolitionist movement. He was committed to Black, women’s, Native American, & immigrant rights. He traveled & lectured in Britain & Ireland, including during the Irish “potato famine” (actually a genocide) & collaborated with abolitionists & freedom fighters in both countries.

During the Civil War, he was an adviser to Abraham Lincoln & helped recruit Blacks to fight with the Union Army against the Confederacy.
In the 1872 elections, he ran as vice president to presidential candidate Victoria Woodhull for the People’s (Equal Rights) Party. He’s one of those the young can learn the most from theoretically & in movement building.

This statue in Washington, DC is one of not enough statues in his honor. It was dedicated in 2013.