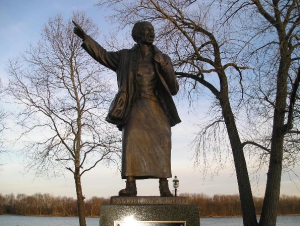 Harriet Tubman (1822-1913) is one of the most remarkable people in American history. She was a runaway slave who escaped in 1849 & became a conductor of the Underground Railroad leading hundreds of slaves to freedom from the South. Risking her own freedom, she went south over & over again to personally lead them at night using the North Star as a guide. During the Civil War, she served as a scout & spy for the Union Army.

There are several, if not enough, monuments to Tubman. This one is in Lions Park, Bristol, Pennsylvania. She is the kind of person young people should be taught to hold in honor & respect. She will always be a giant among us.