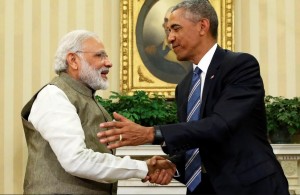 Modi & Obama: a personal “bromance” (as termed by Indian media) or a political indictment?

There’s an entire album of photos featuring Modi & Obama from their several official meetings in both India & the US. Indian media says the two have “chemistry,” even “a special friendship, a special wavelength,” as Modi puts it. It includes public bear hugs, ceremonial tributes, & such tender, nauseating moments as portrayed here at yesterday’s meeting in the White House.

This is the kind of sentimental tripe passed off in Indian media, the NY Times & US media as political analysis of the US-Indian military alliance taking shape. In his 2015 visit to India, Obama declared the US-India relationship a defining partnership of the 21st century. He wasn’t talking about a bromance between himself & Modi. He was talking about US investment in Modi’s neoliberal infrastructure projects that destroy the environment, dispossess thousands of farmers, & force mass relocations to urban slums. He was talking about the new multi-billion dollar arms deals to ally India with the US against China in the Asia-Pacific region.

In an article feigning incredulity at the “unlikely friendship” between Modi & Obama, the NY Times said: “The nation’s first black president, Mr. Obama has made the protection of minorities a central pillar of his life. And he has argued that criticism & dissent are core tenets of democracy.” That was to contrast with the 2002 genocide of Muslims in Gujarat led & orchestrated by Modi–not to mention his current policies targeting religious minorities & imposing Hindu nationalism.

The NY Times is asking us to “suspend disbelief” & pretend Obama has actually done a damn thing to protect Black youth from summary execution & hoping we ignore that he is engaged in massive deportations of undocumented workers. That’s why Obama will not let a little matter of genocide or military occupation in Kashmir stand between the new “defining relationship” of the US & India.

The historic imperative remains: rebuild the international antiwar movement to oppose all this.