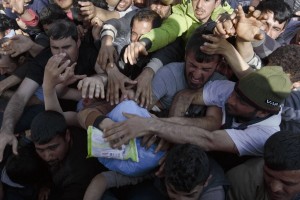 There are more photojournalist reports of men scuffling in the refugee camps than there are of the squalid conditions creating misery & tension–including no sanitation, no place to poop, no way to shower, not enough food, inadequate healthcare, & having to scrounge for scrap wood to keep warm.

Most of the scuffles appear to be around the distribution of food rations. Of course. People are hungry & cold. Their kids are crying, getting sick, increasingly coming down with respiratory infections. They’re living in flimsy, overcrowded tents. Everybody’s traumatized & scared & they’ve got nothing to do but wait. They have no idea what will happen to them. Will their elderly & infirm survive? Will their kids ever get over the nightmares? Will they be deported back to war zones? How long will this ordeal last?

Those who have never known want or fear can look at these scenes & make moralistic judgements or even political ones about the character of refugees. We leave them to their damnations & idiocies.

We demand immigration is a human right. Open the damn borders.