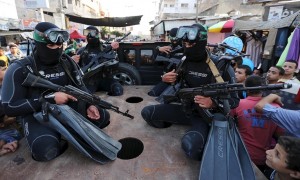 Now here the Guardian-UK goes being sleazy again. There’s likely no country in the world that has more martial displays than the US. Military bands & formations are so chock-a-block in St. Patrick’s Day & 4th of July parades that they outnumber high school bands by a long-shot. It’s all about celebrating & strutting military might. And the same looks true for the UK & India.

But when media really want to scare the bejeezus out of us, they show photos of the goose-stepping North Korean army, the Russian army strutting in Red Square, ISIS formations tearing through Iraq & Syria, & the al-Qassam Brigades on parade in Gaza. The Guardian caption to this photo identified it as “the marine unit of the al-Qassam Brigades, the armed wing of the Hamas movement, taking part in an anti-Israel parade” in Rafah, Gaza Strip.

They can’t show pictures of military parades in Israel since they reportedly stopped holding them in 1973 for financial reasons. But they still hold annual weapons exhibitions & it must be quite a display since the US Pentagon arms them to the teeth with the most sophisticated weaponry.

The al-Qassam Brigades held another parade last December, just a few months after the cessation of Israeli carpet bombing. Israeli media claims these military displays are a show of strength, attempts at psychological warfare against Israel. The fellows here are naval commandos. Their swimming goggles & flippers & even their guns shouldn’t be that intimidating to a military that has bombers, tanks, naval ships, electronic surveillance systems, guided missiles, that impressive Iron Dome, & an active army of 176,500 personnel with a reserve force of 445,000.

Quite frankly, these Hamas parades may be less directed at Israel, where there is no possible military parity, than at Palestinians & their children who must be sustaining massive PTSD from 51-days of bombardment. Trauma of such a scale takes years to resolve. Helping people regain psychological equilibrium & not feel like a target is a worthy purpose for parading naval commandos & rocket units because if Palestinians are to survive in Gaza against genocidal sieges & the blockade, they need a fighting spirit, a sense they are not sitting ducks for Israeli bombers.

They also need political solidarity, to know they no longer stand alone in one of the most important anti-colonial struggles in the world. That solidarity is best rendered by building the hell out of the economic, cultural, & academic boycott (BDS) of Israel.