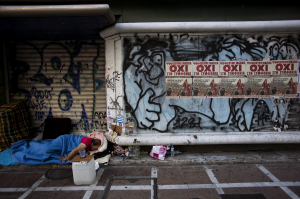 Part of the problem in understanding what’s going on in Greece is that they’re using the language of war: euphemisms. So media tells us that ‘before receiving the €86 billion euro loan package from European institutions, the Greek parliament must approve a catalog of budget cuts & economic reforms, including tax hikes, spending cuts, pension reforms, privatization.’ When you translate that gobbledy-gook, what it means is that European banks will rescue Greek capitalism (for the moment anyway) from the bankruptcy mess it’s in because capitalism doesn’t work, even on paper. The bailout is no solution, but just a stop-gap method to prevent collapse.

And the way the Troika intends to do that is a frontal assault on working people. In the proposals, farmers will lose fuel subsidies; the retirement age will be raised to 67 & early retirements (usually for medical reasons) will be denied; medical costs for pensioners will increase, when already nearly 50% live below poverty levels; public sector workers will face wage & benefit cuts; collective bargaining rights will be abridged; a revamped tax agency will be hunting down tax evaders–by which they don’t mean the millionaires stashing money in Swiss bank accounts but ordinary working people; unemployment which is already massive will increase & tens of thousands will be forced to leave the country for work; homelessness which was over 50,000 people three years ago will go through the roof–& many of them will be elderly & children. Anyone who has experienced the terror of homelessness knows it scrambles the brain in a phenomenon akin to PTSD–& that is particularly so for small children.

They’re also going to be privatizing which means a fire sale on state assets like utilities, airports, sea ports. And of course privatization includes health care, education, social services of all kinds.
What we’re looking at is a bank bailout & a war against working people couched in the language of reforms. They claim military spending will be slashed but you can file that under fat chance because coercion will be fundamental to implementing these “reforms.” The only thing that will be increased is the military budget.

We don’t have to speculate on what this might mean for Greek working people. We can look at Mexico, the Philippines, every Central American country, Brazil, Peru, every African country where neoliberal scorched earth economics has left millions of working people impoverished & dispossessed.

We are looking at neoliberal economics, the reign of terror under the barbaric phase of capitalism. And we need decide if we think human beings are on this earth to serve mammon & an elite handful of predators or for the pursuit of health & happiness for all of us.
Our fullest solidarity with Greek working people.