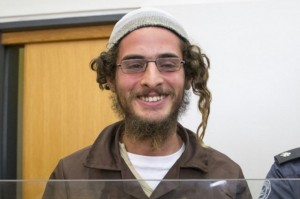 Israel & its supporters want us to denounce the fictitious “stabbing Intifada” & those Hamas tunnels. But let’s talk about political realities & leave rabidity to others. Let’s talk about this psychotic punk, 24-year-old Meir Ettinger, the grandson of Meir Kahane. Kahane was an ultra-rightwing rabbi & Jewish-supremacist from Brooklyn, NY who formed the Jewish Defense League, designated a terrorist group by the FBI. He became a settler to Israel in 1971 & a rabid nationalist in Israeli politics. He was assassinated in NYC in 1990.

Ettinger is a terrorist in his own right, designated as such by Shin Bet (Israel’s counterpart to the FBI) which claims he founded a terrorist organization to “topple the Israeli state.” They had him detained in August 2015 for leading attackers in the July 2015 firebomb attack on the home of a Palestinian family in the West Bank village of Duma. The victims in that arson attack were Ali Dawabsheh, an 18-month-old boy, his mother Reham & father Saed. A surviving brother, 4-year-old Ahmed, was burned over 60 percent of his body & is still undergoing medical treatment.

Ettinger was placed in administrative detention for ten months but not charged with any crimes. He was released yesterday, a free man under a few restrictions, including a curfew, a ban from entering the West Bank & East Jerusalem for one year, & barred from contacting a list of his terrorist cohorts for six months. A curfew & travel ban for murdering three people & seriously injuring a child! The equivalent of the naughty finger for murder! Such is the culture of impunity for Israelis who murder unarmed Palestinians sleeping in their beds!

This monstrous & sorry-assed murderer represents the full flowering of Zionist ideology. He had potential to be a human being but was deranged by supremacism & colonialism. It’s too late for him but future generations of Jewish youth should be spared his fate.