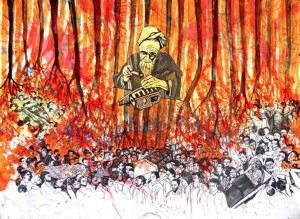 This drawing is titled “Mourning” by Rollie Mukherjee which is appropriate for the Indian occupation of Kashmir where grief & resistance go hand in hand.

Kashmiri human rights activist Khurram Parvez said: “To express it’s commitment on the International Week of the Disappeared, the Indian army disappeared 27 year old Abdul Wahid on 21 May 2016. Based on the testimonies of locals at Kishtwar, it is feared that army may have killed Wahid, as they heard gunshots & then disposed of his body in a rivulet. People in these far flung areas of Chenab valley are suffering unheard.”

Indian journalist Arijit Nag reported: “One of the interesting documents leaked to WikiLeaks was a US Embassy report disclosing the findings of the International Committee of the Red Cross, a respected conservative organization which carefully backs up everything. They reported that there had been torture in the Indian state of Jammu & Kashmir. The ICRC claimed out of 1,296 detainees it had interviewed, 681 said they had been tortured. Of those, 498 claimed to have been electrocuted, 381 said they were suspended from the ceiling, & 304 cases were described as sexual. And then the comment from the Guardian, which reported, “Things haven’t changed much since that period.” (The period covered here is 2002 to 2004.)”

International solidarity with the Kashmiri struggle is an imperative of our historic era.