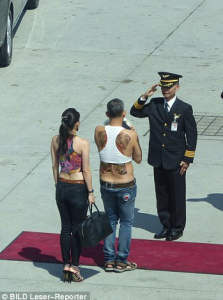 It’s a rude awakening for monarchists who friend me on Facebook to learn I have a loathing for the king-queen crap. I don’t psychologize where it comes from but on the contrary nurture & indulge it.

When the old boy king Pumipon of Thailand died last October (even as a corpse with that contorted sneer on his face), I posted an unflattering, merciless obituary by a Thai political dissident now in exile for violating the draconian lèse majesté law against criticizing Pumipon.

An American Facebook friend protested saying he resented my insults to Pumipon, a beloved dictator. He was so incensed & used such intemperate language that if we lived in Thailand, I’d be waiting for the jackboots to arrive & arrest me under the lèse majesté law.

Our man says the repugnant sneer was because Pumipon had a glass prothetic eye. So did my grandmother but that didn’t contort her face. Then he said some think the sneer is because Pumipon “accidentally” killed his brother as a teen. Three servants were charged with the crime & executed. Pumipon could have pardoned them but chose not to.

When I did not find letting three servants hang for his crime persuasive about the character of the old boy, my erstwhile FB friend accused me of being “completely biased, ethnocentric & idiotic.” In a paroxysm of monarchist outrage, he said “Obviously you have never been to the country & you have your head well stuck up your ass & need a tractor to pull it out.”

So with that I rest my case against Pumipon & shall only dramatize it with this photo of his son Maha Vajiralongkorn, the new king of Thailand before they cleaned him up for duty.

Noppawan “Ploy” Bunluesilp, the woman who took this photo of the new king, was arrested under the lèse majesté law. She had been in Bangkok visiting & was hauled in by police with her child & father-in-law. She is married to a Scottish journalist which may explain why she has now been released.

So I ask you: who is it needs a tractor to pull his head out of someone’s ass?