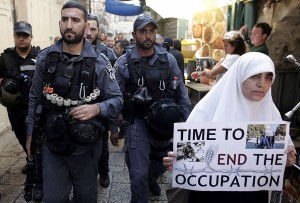 Media reporting of what’s going on at Al-Aqsa mosque takes the cake for lying-assed journalism. That’s nothing new; it’s gone on for 67 years twisting colonialism into an epic Exodus myth. We can thank our lucky stars the Palestinians called for BDS, the boycott of Israel, which has broken through the propaganda wall & allowed humanity to see the truth of apartheid Israel.

According to media reports, which are based on Israeli police statements, Palestinian youth have barricaded themselves inside the Al-Aqsa mosque & are lobbing firebombs, rocks, & other projectiles at Israeli police. They’re not supposed to be there, according to the police, since males under 50 have been banned for months. Media can’t even report that fact honestly–let alone condemn it as an abridgment of religious freedom. They claim Israel imposes that ban “at time of unrest,” though it’s been in effect for nearly a year. They also say women of all ages are allowed, ignoring that just a few weeks ago Israel imposed a blacklist on certain Palestinian women entering the mosque.

In what seems like a non sequitur, police report that Monday was the first day of Sukkot, a week-long Jewish holiday about the exodus. What the hell does that have to do with the mosque since Jews & all other religions are forbidden to worship there by agreement between Israel & the Jordanian trust? All the reported clashes going on in alleyways leading to the gates of Al-Aqsa are because Israeli police are allowing political extremists, religious nut-cakes, & Israeli “tourists,” to enter the Noble Sanctuary to provoke & cause trouble. They are waging a campaign to destroy the mosque & reclaim the site for Zionism–the only religion they swear fealty to. Prayer is the last thing on their mind but if they feel the need to talk to God, they can walk around the compound to the Wailing Wall & pray up a storm in the plaza Israel built where Palestinian homes used to stand.

According to Haaretz, Israeli police ushered in 729 visitors, including 592 Israeli “tourists,” while Palestinian protesters are being arrested all over East Jerusalem. How stupid do they think we are!? This is nothing but a provocation.

This is a very serious situation. Israeli provocations at the mosque caused the second Intifada, a period of intense conflict between Palestinians & Israel that lasted from 2000 to 2005. Is that what Israel is trying to provoke in order to massively increase violence against Palestinians?

Calling emergency protests at Israeli embassies in defense of Al-Aqsa is certainly in order. Build the economic, cultural, & academic boycott of Israel & demand no aid of any kind to apartheid Israel.

Photo is Israeli police patrols in the alleyways of the Old City where protesters like this woman stand steadfast.