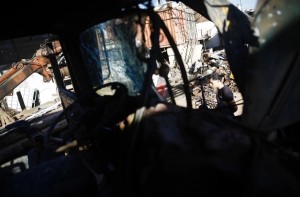 Pictures are worth a thousand lies but that doesn’t make photojournalism the truth-telling part of the media–especially around issues of war & occupation. That’s most apparent today in duplicitous photo coverage of Afghanistan, Palestine, & Kashmir. There is no war coverage of Iraq, Somalia, Pakistan worth mentioning & very little of Yemen & Syria.

Photo coverage of Israel’s 2014 carpet bombing siege of Gaza was extensive–necessarily–but this photo from the Guardian-UK typifies the coverage of the current bombing campaign in Gaza. Of the few photos editors are selecting for publication, most are of vehicles damaged by airstrikes & shot from peculiar angles like this one so you can’t tell what the hell is going on.

But it’s the caption to this photo that takes the cake for duplicity. It reads: “Gaza City–A Palestinian man inspects a damaged vehicle at his workshop after it was hit by an Israeli air strike. Four Hamas sites were targeted, the military said, as tensions flared along the border of the Palestinian territories. The spike in cross-border violence has raised concerns for the ceasefire that has held since summer 2014

What Hamas sites were targeted? Actually, what is a “Hamas site”?
Since Hamas is the elected government in Gaza, is it a public building like a post office or the tax revenue office? What exactly was the nature of those flaring tensions at the apartheid wall between Gaza & Israel? What is that “spike in cross-border violence” all about? Did Palestinian kids throw rocks at heavily armed Israeli border guards? Or much worse, call them naughty names?

And what is this nonsense about a ceasefire–as if two parties were at fault in Israel’s massive genocidal bombing of Gaza? In the past two years, Israel has repeatedly sent bombing sorties into Gaza so they aren’t concerned about that “ceasefire.” But Palestinians & their supporters have every reason for concern that Israel is revving up for another siege of Gaza.

As supporters, our mission is to build BDS & prepare for public rallies & forums to protest Israel aggression & ethnic cleansing.