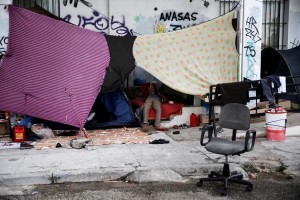 This is a boy in a makeshift shelter outside an unused airport in Athens, Greece which is being used to warehouse stranded refugees, most of them Afghans, since the EU is not allowing them to move north to other European countries.

An estimated 856,723 refugees arrived in Greece last year & an estimated 155,300 this year. It’s not certain how many gained entrance to other European countries. But since the Greek border is now hermetically sealed, some estimate nearly half-a-million refugees are stranded in Greece while the EU makes preparations to deport them back to Turkey. That’s a lot of people unaccounted for.

More than 370,000 of the refugees are children, including 90,000 unaccompanied children primarily from Afghanistan, Syria, Eritrea, & Iraq. Their lives are in grave danger because of EU policies.

How long is the EU going to let this situation go on? There is less media coverage of refugees in Greece now since the deportation procedures are going to be aggressive, violent, undemocratic. There is already plenty of evidence for refugees aggressively resisting authorities. So the devil’s pact between the EU & Turkey to forcibly deport them from Greece to Turkey will not go well.