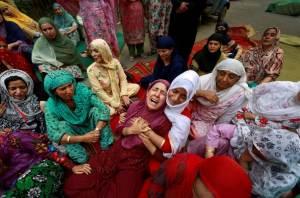 In a few news sources, there is a small increase in reporting about the current siege in Kashmir. But this photo of a recent funeral typifies the coverage. It is often a lone woman walking down a street, women mourning, or a lone protester. The massive protests against the occupation are not covered at all & on Sunday alone there were at least 24 large demonstrations throughout Kashmir.

This is the funeral of Irfan Ahmed, a young man who died from being hit in the chest by a tear gas canister on Sunday. He was part of the protests in Srinagar. Covering funerals in Kashmir is important because the deaths of young people are such a feature of the occupation. But this kind of coverage, which also typifies that of the Israeli occupation of Palestine, is intended to mask the massive character of opposition & make it appear a small number of miscreants & terrorists. One seldom, if ever, sees photos of large protests either in Palestine or Kashmir.

The Indian army is hindering delivery of essential supplies like milk & vegetables to Kashmir. Meanwhile, five milk truck drivers were attacked by soldiers as they carried milk from local producers to Srinagar & elsewhere in Kashmir. Soldiers dragged the drivers out of their trucks, hit them with batons & gun-butts & forced them to crawl on the road. Oil tank drivers have gone on indefinite strike because soldiers are also attacking them throughout the Valley.

May Irfan Ahmed RIP. He died resisting oppression. Our sincere condolences to his family & friends.