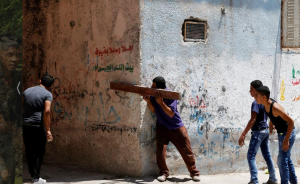 The caption to this photo in Reuters read: “A Palestinian man points a plank at Israeli troops during clashes in the West Bank Al-Fawwar refugee camp, south of Hebron August 16, 2016.” Do you think they teach that stinking kind of journalism in college where you can’t tell what the hell happened even from a photo?

It will take a few more sentences to report what actually happened in Al-Fawwar: On August 16th, the Israeli army conducted one of its frequent military operations into the refugee camp in the occupied West Bank. The camp was surrounded from all sides with soldiers blocking entry & exit. No one was able to get in & everyone was interrogated on the way out. The UN, which provides services to the camp, was allowed in but no report is forthcoming from them about what they witnessed.

Armed with semiautomatic weapons, soldiers invaded & conducted a violent house to house search ostensibly searching for weapons. They tore through homes upending & trashing furniture & belongings for several hours, & interrogating & photographing dozens of families. After about 24 hours in the camp they only turned up “two improvised handguns” & other unspecified “weapons & ammunition”—most likely a slingshot or two. By the time the rioting soldiers left, one teenage boy had been killed by a shot in the back with a live bullet & 40 were injured—at least ten with live ammo & 25 with rubber-coated steel bullets. Witnesses say soldiers tossed sound & gas grenades at school children throwing stones at them.

Al-Fawwar refugee camp is close to the city of Hebron. The number of residents is between 9,000 & 10,000 in an area less than one-square kilometer. It has inadequate sewage & sanitation facilities & one of the worst poverty levels among Palestinians.

Residents of Fawwar sustain continuing harassment by the Israeli army which has a base near the camp & by residents of a large Israeli settlement nearby. Last month, the camp was cordoned in for 26 days “after a gunman belonging to a Hamas terror cell” fired on a car of Israeli settlers, causing it to crash. What that incident had to do with residents at Fawwar is not explained. Nor do they elaborate how they know the gunman was a member of Hamas & not another deranged Israeli settler.

Violent home invasions are an instrument of occupation to terrorize & are as prevalent in the West Bank as they are in Kashmir where they are a major issue in this current siege.

The name of the 17-year-old killed was Mohammed abu Hashhash. May he RIP. To honor his life we should build the hell out of the economic, cultural, & academic boycott of Israel (BDS). Buy nothing with a barcode beginning 729 & check everything you buy.