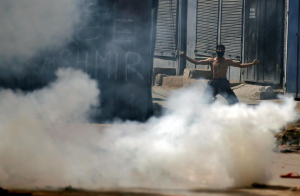 Not to take away from the commitment & fearlessness of this protester who stands half-dressed before tear gas & pellet guns, but the lone male protester typifies all media coverage of the Palestinian struggle & now models coverage of the Kashmiri struggle.

According to several reports & photos on social media from Kashmiri sources, there are massive protests all over Kashmir every day. Some are funeral cortege/protests for the many who’ve been killed but all are defying the curfew to protest against the occupation.

The media representation of lone male protesters, often hurling rocks, is a tendentious & insidious way to buttress Israeli & Indian government claims that resistance to military occupation is by a minority of violent, nihilistic, antisocial terrorist youth & not political resistance of tectonic social dimensions.

The popular character of resistance is seldom portrayed outside of social media. Try to remember the last time you ever saw a photo or read a story in any major media of massive protests in either Palestine or Kashmir.

After Indian forces put up a cordon today around the house of 86-year-old Kashmiri leader Syed Ali Geelani to prevent journalists from attending his press conference, he emailed a statement to media. It is worth reading in full but these two passages are particularly relevant to this post:

“…between us & our freedom stand half a million Indian guns only. Never before have we been so close to freedom with such clarity as we are now. We have reached this stage because the people of Jammu & Kashmir have not only resisted the brute military occupation of India with exemplary courage & sacrifices but also repeatedly shown that the people would not be defeated.”

“The greatest sign of our victory is that the mighty army of our occupier has to shoot dead middle-aged women, a 21-year-old girl & beat to death a teacher. If after 70 years of military control, a soldier has to kill an unarmed woman & a schoolboy with a stone in his hand to forcibly keep Kashmir under Indian control, what bigger proof do we need of who has been defeated & who is victorious? The bullets of Indian soldiers are merely the symbols of their cowardice.”