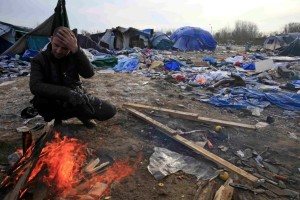 In the journalistic genre known as “if we don’t report it, it isn’t happening,” there is almost a complete photojournalistic news blackout on the refugee crises in the Mediterranean & in Europe. Occasionally a photo will appear & if you search you can find some reports, but otherwise it’s as if thousands of refugees have simply dropped off the face of the earth.

At an EU meeting a few days ago, the EU “migration commissioner” warned officials that the refugee crisis was getting worse. He reported that over Christmas & New Year, 4,000 people continued to arrive daily in Greece, that Greece was unable or unwilling to register or lodge them in the squalid, overcrowded refugee camps there, & that hundreds of thousands were still heading north without papers. He also reported that more EU member states, most recently Germany, Sweden, Denmark, & Austria, are installing border controls to keep refugees out. “Border controls” is a euphemism for razor wire fences & soldiers with tear gas forcibly driving refugees back.

Our man needs to explain a whole lot more than that. Like what’s happening to the thousands of refugees when they’re locked out of a country & have no place to go in the middle of winter? Is someone providing adequate shelter & food for them? Or are they being left to starve & freeze to death to let nature solve the refugee crisis?

What about big-talking Francois Hollande who promised he would let thousands enter France? Why is he instead using bulldozers & storm troopers at Calais to dismantle makeshift shelters in the middle of winter? Why aren’t EU officials calling him on his promise? The Kurdish refugee in this photo now has to keep warm by an open fire. What about the little kids in the camp?

What about the FRONTEX military operation on the central Mediterranean route from Northern Africa to Italy? Last June when they launched operation EUNAVFOR Med., they had a one-year mandate with all sorts of warships & airplanes deployed to conduct boarding, search & seizure operations on
the high seas & stop refugees from leaving Libya. What, no progress report!? Did they rescue refugees from drowning? Return them to Libya? Incarcerate them on Lampedusa or Malta? Or have they scared off all the refugees from even trying?

So many question, so few answers. So much deceit & even more treachery. The EU commissioner expressed concern that the refugee crisis would signal the collapse of the Schengen visa-free travel system & be “the beginning of the end of the European project”–meaning the EU. The entire capitalist nation-state system is rocking on its foundations by its unwillingness & inability to address the massive problems it creates–like war & refugees.