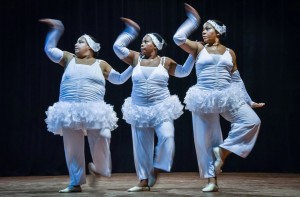 Because of the role of prima ballerina Alicia Alonso (now 94-years-old) in developing & popularizing ballet in Cuba, ballet is not considered high-brow art (as in the US & most other places) but is as popular as baseball. Cuban ballet has become renowned worldwide & the principals in many leading ballet troupes around the world are Cuban-trained.

A notable thing about ballet generally is the size-zero tutus worn by dancers as they pirouette & execute mid-air leaps. Classical ballet is not the art form for anyone weighing over 100 pounds–although it does not exclude disabilities. Alonso was partially blind most of her dance career & accommodations had to be made with her partners & stage lighting to guide her on stage.

Juan Miguel Mas (now 50-years-old) was a heavyset Cuban-trained dancer who had difficulty fitting into the Cuban dance scene. Roles were limited & had to be modified or created specially for him. In November 1996, out of frustration, he created Danza Voluminosa, a professional modern ballet troupe for heavy dancers that includes six women & one man. It has now produced three full-length choreographies, 30 shorter works, been the subject of a Canadian documentary (“Defying Gravity,” 2004), & has become a cultural phenomenon in Cuba. They now draw record crowds & play all the top venues in Cuba. In this photo, they are rehearsing at the National Theater in Havana.

According to Mas, the purpose of Danza Voluminosa was to create a troupe where heavy dancers could perform a style suited to their bodies because heavy people move differently & slower. They don’t soar, spin like tops, & leap but are more grounded & keep a lower center of gravity. The only comparable phenomenon in US dance is Judith Jamison, the Alvin Ailey dancer & choreographer who was not heavy but was also not petite & is nearly 6 feet tall.

As choreographer, Mas says he borrows from the work of Martha Graham & Jose Limón, & incorporates African, jazz, & Caribbean folkloric dance often with West African roots. “I use whatever I can,” he said.

Mas created a dance troupe, not as a therapy group nor intending to glorify weight or sermonize against prejudice, but to give heavyset dancers a place to perform, to explore the inherent beauty of the human body & of movement.