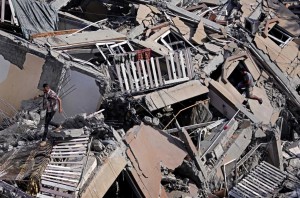 After a while trying to suss out facts from media reports, you catch on that most news is canned & there is little on-the-spot investigation & you only wish that could explain the idiocies of reporting from Gaza. At what point will media around the world admit that news coverage coming out of Gaza about Israeli genocide is simply nuts & that the go-to source for information is the Israeli military?

This weekend Israeli bombers went on a rampage in Gaza City & Rafah. They took out a two-story shopping mall & a seven-story office building in Rafah & a twelve-story apartment complex in Gaza City. The military claims they warned apartment residents by automated phone calls that it was targeting buildings “harboring terrorist infrastructure”–so if you live in Gaza you better make damn sure you don’t go to the toilet & leave your phone in the kitchen.

Media claims targeting tall buildings signals a new escalation in the seven weeks of Operation Ethnic Cleansing & a new military tactic by Israel. You don’t know whether to laugh or cry at such a statement. For seven weeks we have seen one photo after another of several-story apartment buildings & other facilities taken out by Israeli bombs–hundreds of photos & dozens of news accounts reporting that Israeli bombers repeatedly strike apartment complexes to make sure there isn’t a soul left standing. This is not a new military tactic but the continued policy of ethnic cleansing.

The Israeli military justified the bombing of apartment complexes by claiming they housed “Hamas operational centers” or that Hamas held meetings in them or that military activities were launched out of them because it’s just too stupid to claim they’re going after tunnels in a twelve-story building. But quite frankly Israel can claim any baloney it likes because media will echo it even when it doesn’t make a damn bit of sense.

Last Friday, a 4-year-old Israeli boy named Daniel Tregerman was killed, allegedly by Hamas fire. May the little guy RIP since he has no responsibility whatsoever for the crimes of Israel. He lived on a kibbutz right on the Gaza border near the infamous town of Sderot, where residents perched for weeks cheering on ethnic cleansing in Gaza. We say allegedly by Hamas fire since proximity to massive Israeli bombing in Gaza means it could be a misfired Israeli missile. We need to see some evidence.

There are hundreds of media stories about little Daniel; Zionists around the world are inflamed with outrage. Yet when over 469 children & infants in Gaza were bombed to death (& the death toll continues to climb), Zionists not only claimed in the most shameful & racist way that Palestinians use their children for human shields but they sat in lawn chairs & cheered it on. A few weeks ago Lionel Messi, an Argentine soccer star, posted a photo of an injured Palestinian child on his FB page, expressing his anger at the deaths of children & now Zionists are barraging him with demands to acknowledge the death of Daniel. They don’t give a rat’s ass about Daniel; they’re using his death to justify ethnic cleansing in Gaza.

We express our condolences to the family of Daniel Tregerman. On Sunday, 18-month-old Zainah Abu Taqiya was killed in one of those apartment buildings in Gaza. We express our condolences to her family also & recognize the deaths of both children & all the other Palestinian children & adults are war crimes that Israel should be indicted for in an international tribunal.

Pay tribute to all those killed in Operation Ethnic Cleansing by continuing to rally, educate, & evangelize for the boycott of all Israeli products (barcode beginning 729). Demand that Israel stop the massacre & end the blockade in Gaza.

This photo is the rubble of the 12-story Al-Zafer apartment complex in Gaza City bombed on Saturday. Media repeats Israeli military claims that it was a Hamas command center.