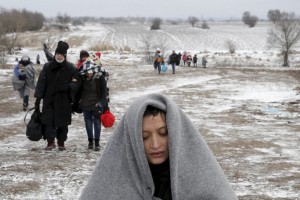 There have been news blackouts on the refugee crises all over the world. That’s an extraordinary, almost criminal omission when you know that over 60 million people are now on the move, displaced by wars, persecution, & neoliberal economic policies involving land theft for mining & agribusiness, sweatshops, & child labor. They’re running from the killing fields of neoliberalism, the barbaric phase of capitalism.

It’s a humanitarian & political crisis involving tens of thousands of unaccompanied minors from Central America crossing the US border–with no coverage in local or national news; involving hundreds of thousands crossing the Mediterranean from Africa–with no coverage of the African diaspora, most importantly if FRONTEX naval operations have rescued thousands from drowning. In the past few years on that route, over 25,000 drowned, making the Mediterranean a crime scene for which European Union (EU) officials still should face prosecution. Media reporting on the FRONTEX operation is locked down tighter than a drum so we don’t know what’s going on–except for a few reports of drownings.

Since winter began, media reports of the Turkey to Greece diaspora from the Middle East went down to almost nothing, giving the impression that the crisis had abated. In fact, according to the UN refugee agency, the number of crossings since January 1st of this year is nine times what it was a year ago. In January 2015, 5,560 arrived by sea; already this year, 46,121 have arrived. Drownings in the Aegean have increased to 149 just this month, 45 this past week alone when their boats sank near the Greek islands.

Using a deft switch & bait technique, EU officials try to dump the blame on human traffickers for the drownings. Why aren’t FRONTEX ships & Greek & Turkish coast guard ships out there on constant search & rescue missions? Why are they allowing refugees to travel in plastic rafts rather than sending ferries to carry them safely? Truth of the matter is, human traffickers wouldn’t be in business if the EU wasn’t throwing up dangerous obstacles for refugees fleeing war.

Perhaps the most damning feature of the EU response to this massive crisis (& this prevails on the US-Mexican border also) is the governmental refusal to provide any kind of assistance to the refugees. The food, shelter, medical aid, thermal blankets, & human kindness they receive comes entirely from volunteer groups & local residents while regimes do the policing & enforce impediments to asylum–separating refugees by nationalities & asylum seekers from those to be deported; fingerprinting & documenting; bussing them (especially single men) to detention centers. UN officials seem to function primarily as high-paid bean counters & have made themselves useful by keeping a daily count–at least of the Middle East diaspora.

These news blackouts are a political choice by media, a method of dehumanizing refugees so that regimes can blither on without challenge about ISIS & terrorists sneaking across the borders in the guise of refugees.

This photojournalist has an album from the current winter trek of refugees. He headed for the Serbia-Macedonia border to document how refugees were coping with -20C/-4F temperatures in snow conditions & with “wind so strong you have to walk backwards into it.” He said “The wind was so noisy that the migrants weren’t able to talk to each other. Many of them were crying from the cold. I was speechless.”

We’re speechless too. And outraged. The refugee crises are a challenge to the very foundations of human civilization. If, like our governments, we were unwilling to render human solidarity, we would align ourselves with the forces of barbarism. But every inch of the way, refugees have encountered the kindness of strangers who recognize a human being when they see one & think that matters. Now the task remains to bring our political solidarity into accord with our humanitarian assistance.