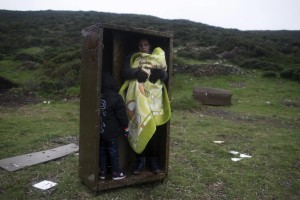 It’s probably sufficient to let this speak for itself as a photo worth a thousand condemnations of EU refugee policies–not to mention media coverage of the crisis.

This Syrian woman & her two little kids ended up on Pasas, an uninhabited Greek island in the Aegean, & found shelter in this box. How in the world did they end up there? Did their raft sink? Were they dumped by human traffickers? Did they think they were landing on Lesbos? Did anybody else land with them or are they alone? Whatever has jaded media’s investigative faculties so badly that her plight does not merit some elaboration?

Consider the possibilities for what might have happened to them if the photographer hadn’t been around. Consider the barbarism of war & EU refugee policies that she could have died with her children on a deserted island.

Immigration is a human right & those who obstruct it should be prosecuted. War is an abomination & it should be opposed.