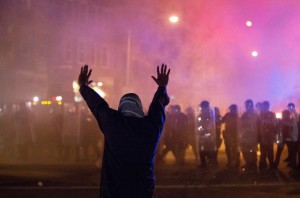 There is a concerted media campaign to turn the discussion about Baltimore into moralizing about the looting, arson, vandalism even though there is precious little evidence it is widespread. Allegedly, a senior community center, pharmacy, wig store, & convenience store were torched by protesters. Maybe the protesters torched all four; maybe they didn’t.

Obama made a statement about Baltimore that echoed what he said about Ferguson. As forcefully as one can in a monotone, he condemned the riots in Baltimore & called those involved “criminals & thugs.” In Ferguson he said “I don’t have any sympathy for protesters burning buildings.” So now we know where he stands on that question. Where does he stand on police violence that provoked the outrage? What does he think about suspending the Bill of Rights in Ferguson & Baltimore? On that he’s remained dumb as a stump. What does he have to say about the hundreds of Black kids murdered every year by cops?

In September 2014, the Baltimore Sun newspaper reported on their six-month investigation of police misconduct in the city. They reported the city of Baltimore paid out about $5.7 million since 2011 from lawsuits claiming police brutality & civil rights violations with alleged suspects. That’s not counting another $5.8 million spent by the city on legal fees to defend the accused cops. The newspaper found a “disturbing pattern” of such conduct. Over 100 people had won court judgements or settlements in a period of less than four years & the victims ranged from a 15-year-old boy to a 65 year-old church deacon & an 87 year-old woman helping her wounded grandson. That’s what needs to be talked about–not stealing toilet paper from a chain pharmacy.

Fox News is reporting that a data mining firm (which shared its findings exclusively with them) analyzed social media interactions in Baltimore & found 20 to 50 social media accounts were used to provoke & organize violence in both Baltimore & Ferguson. Fox reports ” While further analysis is being conducted on the data, it suggests the presence of “professional protesters” or anarchists taking advantage of Freddie Gray’s death to incite more violence.” The old “outside agitator” claim they used not just against civil rights activists who went to Ferguson to stand with the Black community but against activists who participated in the Civil Rights Movement of the 1960s. On the face of it, it’s farcical but it’s a serious charge since crap like that can be used to censor social media & prosecute those who defend the Black community on social media.

The discussion of those who stand with civil rights & Black power should not be controlled by media or Obama’s turgid rhetoric but by justice & the Bill of Rights. When they talk about the pharmacy, we talk about Freddie Gray. And we stand with the protesters in Baltimore without reciting the mantra “I’m opposed to rioting, but…!”