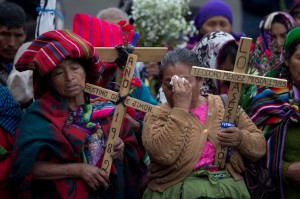 Only a few days ago, Kashmiri Women’s Resistance Day commemorated the February 1991 mass rape of women & torture of men at Kunan Poshpora, protested sexual violence as a military tactic, & the impunity of the Indian occupying army.

Yesterday, Mayan women in Guatemala commemorated the National Day of Dignity for the Victims of Armed Internal Conflict to honor the victims of the civil war between 1960 & 1996. They commemorate annually on February 25th because on that day in 1999, a UN-backed truth commission (CEH) released its investigation titled “Guatemala: Memory of Silence” describing Guatemalan military violence against the civilian population, including torture, forced disappearance, mass rape, massacres & mass graves, razing entire villages & crops, displacing entire communities, & acts of genocide against the Mayan people. There is no healing from such monstrous crimes without justice. Genocide has a long memory.

In twelve volumes the truth commission detailed 200,000 dead, 45,000 forced disappearances, displacement of one million people, & over 100,000 women raped. First the army took the men & massacred or disappeared them; then they returned for the women who they raped in front of their children. Like the “comfort women” of the Japanese army in WWII, women were forced to work shifts at military bases where they were turned into domestic & sexual slaves.

The UN-backed truth commission presented the report in 1999 to then president Álvaro Arzú, the military high command, & other Guatemalan officials–most of whom were up to their eyeballs in the genocide or in giving post-war amnesty to military personnel involved. The women have not ceased from seeking justice despite every attempt by the Guatemalan regime, military, & judiciary to thwart them. In 2012, Mayan women testified at the trial of military dictator & evangelical Christian, Efrain Rios Montt, the man responsible for mandating & orchestrating the crimes (in collusion with the US Pentagon). He was found guilty of genocide & crimes against humanity in 2013 but a Guatemalan court overturned the verdict only a few days later. He is awaiting retrial but the courts will make sure he continues to elude justice.

Because of the social stigma associated everywhere with rape & sexual crimes, it is politically extraordinary & beyond admirable that women around the world who were victims of rape as a military tactic are coming forward resolutely & in large numbers to demand justice. They include the survivors & advocates of tens of thousands of women forced into sexual slavery by the Japanese military in WWII, the women of Kashmir, & the Mayan women of Guatemala. What they have made absolutely clear to the world is that military rape is a systematic, cold-blooded military operation of war & occupation, not a case of troops gone wild.

Our deepest respect & commitment to stand with them in exposing the monstrous crimes of militarism.