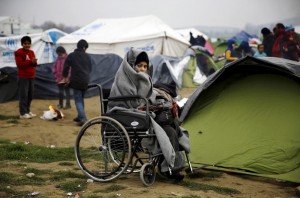 This young boy is a “temporarily stranded” Syrian refugee in a makeshift camp near the Greek village of Idomeni close to a crossing point on the Greek-Macedonian border. Temperatures now are 12 degrees Celsius in the daytime & 3 degrees at night (54 degrees Fahrenheit daytime & 38 degrees at night)

An estimated 20,000 refugees are stranded in 18 camps on the Greek side of the border because EU countries (most notably Austria, Serbia, & Germany) are only accepting Syrian & Iraqi refugees & are refusing asylum to Afghan refugees. Macedonia has sealed both its north & south borders & created a massive bottleneck in an attempt to keep Afghans from moving north.

While Greek police are assailing refugees & attempting to bus them back to relocation camps, communities in the region are providing shelter & support to refugees by opening up sports arenas for shelter; pharmacies & hospitals are offering medical assistance; citizens & businesses are providing food & aid.

Afghan refugees are second in number to Syrians so the crackdown on them, which began last October, was a way to eliminate tens of thousands of asylum seekers. Although there is no provision in EU law for a Safe Country of Origin list to designate who is a refugee & who an “economic immigrant,” the EU devised such a list last September. Afghanistan was not on it because it is a war zone.

In October, German officials began publicly defending their denial of asylum to Afghans. The Interior Minister, braying like a jackass, said Afghan refugees were mostly middle-class & that large amounts of development aid was being sent to Afghanistan so they should stay in their own country to rebuild it.

It should have been pointed out to Herr Jackass that German troops were part of the NATO forces making Afghanistan unlivable to millions, that forced millions to flee to Pakistan & Iran, & now to Europe. According to an investigation by German media sources, 1,650 Afghans employed by the German military as interpreters were eligible for safe haven but 60 percent of their applications were denied. Instead, Germany is now trying to fast-track deportation procedures back to Afghanistan.

Last week, several EU countries signed a joint statement laying out tighter entry restrictions barring Afghans & preventing them from moving north. Hundreds are now stuck in Macedonia because Serbian officials are denying them entry & in Greece because Macedonia is denying them entry. The joint statement said that “longer residence in a safe third country” are grounds for rejecting asylum seekers & noted as an example “Afghan nationals who for a longer time stayed in Turkey or Iran”. This certainly comes from the EU which is winging it as it goes along, extemporizing idiotic new rationalizations (to supplement the Safe Country of Origin list) to flout international law governing the rights of refugees to asylum. What possible rational relevance is it that an Afghan fleeing war first fled to Iran or Turkey (where it might not have worked out) & then fled to Europe?

This EU denial of Afghan refugees may play a role in why UN operations in Afghanistan recently denied the US occupation existed & described it a civil conflict. Or is that assuming too much coordination between government bodies? One could never assume too much malevolence.

And for all that, the EU is willing to leave those with special health needs, those who are war-traumatized, elderly, infirm, children, to be stranded for long periods in near freezing temperatures & squalid conditions. It may be time to dump the EU as too vicious for human society.

Immigration is a human right. Open the borders. And it should be added, US out of Afghanistan!