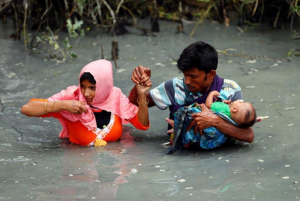 There is a distinction made in international law between ethnic cleansing & genocide. Ethnic cleansing is defined as systematic efforts to drive out an ethnic or religious group from a geographical area. Genocide is defined as systematic efforts to exterminate them outright. The scorched earth methods used to accomplish both are indistinguishable, especially massacres.

UN Secretary-General Antonio Guterres & Phil Robertson from Human Rights Watch have chosen to define what is happening to the Rohingya people as ethnic cleansing. That is apparently the establishment line. Rohingya activists & Burmese dissident Maung Zarni do not hesitate for very strong reasons to call it genocide. Making such a distinction doesn’t mean the UN will do more or less to stop the genocide; because of Chinese & Russian support for Burma in the UN Security Council, the UN hasn’t even condemned what’s going on. Guterres only shook the naughty finger at the generals & the head of the UNHCR said it looked like ethnic cleansing.

You can hear some of that debate about ethnic cleansing or genocide here (in a video within this article) between Phil Robertson & Maung Zarni. They also take up the question of Aung San Suu Kyi’s role where Robertson expresses hopes that Suu Kyi will come around & “step up to halt the genocide”. You ought not to be in a position of authority on human rights issues if your credulity is still on the level of a five-year-old who can’t come to grips with the fiction of the tooth fairy. Maung Zarni who has no illusions on that score (& no commitments to power) answers quite cogently.