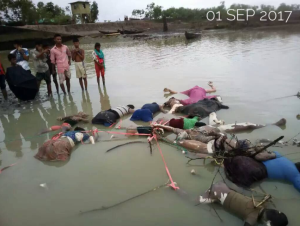 No one wants Trump to make a public statement about the genocide of Rohingya even if he reads it off a teleprompter from a script supplied by the State Department. He’s a stupid jackass & an Islamophobe who has nothing credible to say about anything. His indifference & contempt would be impossible to hide & his involvement would only be unseemly & inappropriate to the gravity of a genocide.

But the US has weighed in on the genocide & not in a good way. In its competition with Russia & China, it has been currying favor with the junta & with the Suu Kyi regime. In the first statement it issued nearly two weeks after the genocide began, the US refused to criticize the Burmese military. Instead, it said the generals should respond responsibly to the terrorist attacks that incited the military: “They {the generals} have a responsibility to carry out those activities in accordance with rule of law & international human rights.” How do you carry out a genocide responsibly & according to what rules of law?

The second statement from the State Department was the same blither & the same refusal to criticize the military but they added that since October 2016 the US has provided nearly $63 million in humanitarian assistance to the Rohingya displaced in the last genocidal assaults. Really? We’d like to see an accounting of that dough even though we don’t hesitate to say it’s probably as big a lie as their claims that they donated millions to Haitian earthquake relief & to Afghanistan humanitarian aid. Somewhere between the promise & the delivery it ends up in the wrong hands if it’s ever dispensed in the first place.

The US State Department can blither about terrorists until the cows come home but their refusal to address the 400,000 refugees fleeing for their lives says everything you need to know about US policy in Burma & about its attitude toward genocide.

(Photo is Rohingya refugees who drowned when their boat capsized. May they Rest In Peace.)